The wiki about Roald Dahl's 1961 book, James and the Giant Peach,
and the 1996 stop-motion/live action Disney film that is based on 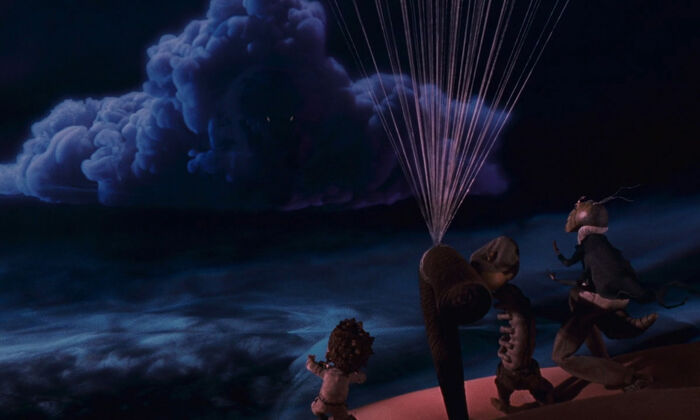 James Henry Trotter is a young boy who lives with his parents by the sea in the United Kingdom. On James' birthday, they plan to go to New York City and visit the Empire State Building, the tallest building in the world. However, his parents are killed by a ghostly rhinoceros from the sky and finds himself living with his two abusive aunts, Spiker and Sponge. He is forced to work all day and they threaten him with beatings and the mysterious rhino if he tries to leave. While rescuing a spider from being squashed by his aunts, James meets a mysterious man with a bag of magic green "crocodile tongues", which he gives to James to make his life better. The soldier warns him not to lose the "tongues" and disappears. When James is returning to the house, he trips and the "tongues" escape into the ground.

One peach is soon found on a withered old tree, and it grows to immense proportions. Spiker and Sponge use the giant peach as an attraction, making lots of money as James watches from the house, not allowed to leave. That night, James is sent to pick up the garbage. While doing so, he grabs a chunk of the peach to eat as one of the "crocodile tongues" jumps into it. A large hole appears inside the peach and James ventures inside, were he finds and befriends a group of life-size anthropomorphic bugs who also dream of an ideal home (Grasshopper, Centipede, Earthworm, Miss Spider, Ladybug, and Glowworm). As they hear the aunts search for James, Centipede manages to cut the stem holding the giant peach to the tree and the peach rolls away to the Atlantic Ocean with James and his friends inside it.

Remembering his dream to visit New York City, James and the insects decide to go there, They use Miss Spider's silk to capture and tie a hundred seagulls to the peach stem, while battling against a giant robotic shark. They escape just in time. While flying, James and his friends eventually find themselves hungry and soon realize that "their whole ship is made out of food". After gorging most of the inside of the peach, Miss Spider, while using her web to tuck in James, reveals to him that she was the spider he saved from Spiker and Sponge. James then has a nightmare of him as a caterpillar attacked by Spiker, Sponge, and the rhino. When he wakes up, he and his friends find themselves in Antarctica, lost and cold. The Centipede has fallen asleep while keeping watch, resulting in them further away from their destination than ever. After hearing the Grasshoper wishing they had a compass, Centipede jumps off the peach into the icy water below and searches a sunken ship. He finds a compass but is taken prisoner by a group of skeletal pirates. James and Miss Spider rescue him and the journey continues.

As the group finally reach New York City, a storm appears. A flash of lightning reveals the rhino approaching towards them. James is terrified but faces his fears and gets his friends to safety before the rhino strikes the peach with lightning; The strings keeping the seagulls attached to the peach are cut and the peach falls to the city, dragging James with it. James coughs up the crocodile tongue as he reawakens, and emerges from the peach realizing it has landed right on top of the Empire State Building. As he is rescued by the police and firemen, his aunts arrive and attempt to take back James and the peach. James stands up to his aunts, revealing their abusive behavior towards him. The aunts attempt to kill James when the bugs return, landing on the peach thanks to the remaining seagulls. They tie up Spiker and Sponge with Miss Spider's silk and the police arrest the two. James introduces his friends and allows the children of New York to eat up the peach. The peach stone is made into a house in Central Park, where James lives with the bugs and has all the friends he could wish for. Centipede runs for New York mayor, Grasshopper becomes a professional violinist, Earthworm becomes a mascot for a new cream, Ladybug becomes a nurse (now delivering her 1000th baby), Glowworm lights up the Statue of Liberty, Miss Spider owns a club called "Spider Club", and James celebrates his 8th birthday with his new family. In a post-credits scene, a new arcade game called "Spike the Aunts" is shown, featuring the rhino.

Want to affiliate with us?
If you would like to become an affiliated site, please contact an administrator.

Retrieved from "https://james-and-the-giant-peach.fandom.com/wiki/James_and_the_Giant_Peach_Wiki?oldid=4352"
Community content is available under CC-BY-SA unless otherwise noted.